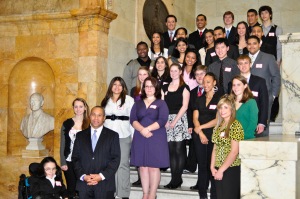 The Council, established by executive order in April 2008, encourages young people to become civically engaged in their local communities and to help tackle the state’s biggest challenges, including education reform, youth violence and bullying, by assuming leadership roles.

This new class of young people is the second group of students to serve on the Youth Council and will hold their positions for a two-year term. The Council is comprised of 28 members – two representatives from each of the Commonwealth’s 14 counties.

Members were selected by an application review committee for their excellence in leadership and their outstanding potential to create change in their communities. Members range from ages 14-20.

Emma HallsBilsback was nominated by the Martha’s Vineyard Youth Leadership Initiative to serve on the Governor’s Statewide Youth Council.